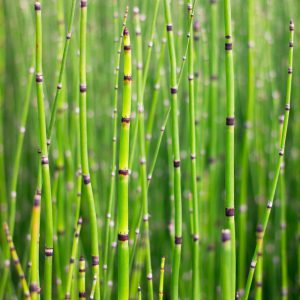 Silicon is not considered an essential element for plants because not every plant needs silicon to live or thrive. But for some plants, silicon is a life or death matter. Plants like horsetail in the Equisetaceae family require silicon to live. In other plant families, other elements take on the responsibilities of silicon, so it is not a truly essential nutrient.

But those plants that need silicon need it in large amounts, more like a macronutrient than a micronutrient. Silicon helps make a waterproof layer in some cells, which forms a barrier that keeps water in. This helps the plant survive better in drought conditions and prevents plants from wilting. Once silicon is in a plant, it can’t move around, so any silicon deficiency shows up on new growth first.

Of course, even though silicon isn’t essential to most plants, it is still helpful to many of them. Roses and cucumbers benefit from silicon in the soil, among other species. Grasses like rice and wheat take in quite a bit of silicon from the soil, which helps strengthen their stems. But even if those plants are in your garden, you are unlikely to need a fertilizer with added silicon. Over 90% of the earth’s crust contains silicate minerals, so garden soil almost never demonstrates a silicon deficiency. So that’s one thing you can cross off your garden nutrition checklist!